A writer who is both me and not me, when asked what his book is about, says the question he asks is: who among your neighbors will look away when a figure of authority will come to you door and put a boot in your face.

I’m talking about what’s going on in the first few pages of my recently published book, A time outside of this time. The question our narrator asks above might remind you of a book like George Orwell’s 1984, but I was thinking of closer examples. I had seen a video of a man named Qasim who was lynched by a mob in Hapur, Uttar Pradesh, in 2018. In the video, Qasim sits in a dried up canal next to a field. He was assaulted by cow vigilantes. We can’t tell by looking at Qasim, but his ribs and knees have suffered fractures; there are bruises on her body, wounds made with screwdrivers and sickles, and there are fatal wounds on her private parts.

In the video, we can see the spectators. Qasim asks for water, but no one answers, and he falls into the earth, as if settling down to sleep in his bed, one knee folded over the other. For the narrator of my novel, the question that arises is similar to the one he asked earlier: What can you write that someone reading you gives a drink to a dying person?

The world comes to us in the form of bad news. In addition to writing news fiction, I used newspapers as a painting surface, using gouache to modify or transform what I had first encountered only as news. When the pandemic hit America, I painted over obituaries printed in the New York Times. From India, even earlier, there were reports of lynchings and rapes. I asked my sister from Patna to mail me some Hindi and English newspapers, then got to work in an effort to regain some sanity.

I’m not the only one doing this, of course. For a recently unveiled virtual museum, As If A Girl Matters, artists and writers reacted to a crime that took place in Kathua, Kashmir in 2018. The facts are gruesome and well known. Eight-year-old Asifa Bano was gang raped and murdered in a temple. She was from a nomadic Muslim tribe of shepherds and grazed horses on public land when she was kidnapped. His captors wanted to drive out the tribe to which Asifa belonged from the region. The details of the case are terrifying even to read, and it is particularly intolerable to imagine the body of a child transformed into a battlefield.

Over a hundred visual artists, dancers, writers and musicians donated their works to the recently unveiled virtual museum, “as if a girl mattered”.

More than a hundred visual artists, dancers, writers and musicians, to pay tribute to the life of Asifa, have donated works to the virtual museum. Here is a small sample: Arpita Singh maps a geography on canvas where the names Kathua and Unnao are repeated; Nilima Sheikh presents a painting of a young girl transforming into a woman in “When Champa grew up”; Gauri Gill’s black and white photograph from 1999 depicts a shepherdess and her goat in the desert of Rajasthan. There are several wonderful dance and mixed media pieces: for example, Mallika Sarabhai’s graceful and uninhibited interpretation of “Still I Rise” by Maya Angelou; a video of dancers from Raw by Nature illustrating the racist violence of police murders in the United States; the slow, gentle choreography of the late Astad Deboo alone in a room; or the brilliant dance body presentations of Melissa Wu in the grainy urban spaces of New York. The writing organized on the website shows an equally wide range. From the eight haikus by Kiran Desai who invoke the presence of an eight-year-old girl named Asifa to an essay by Anuradha Roy centered on the day the news broke; from a poem by Meena Alexander dedicated to Nirbhaya to a play by Deepti Priya Mehrotra from which we learn that Indian courts heard 64,138 cases of child rape in 2016 alone.

Contributions to As If A Girl Matters cover a wide range, a generous mix of established and lesser-known names. For my own contribution to the museum, I sent a painting that I had done in the days immediately following Asifa’s discovery. I had imagined the steps of the temple and named the painting “Haadsaa”, which I translated in my mind as “a tragic event”. For this painting, I used a sheet of a newspaper sent by my sister from Patna. Then a few days later I did another painting. On this page from a Hindi newspaper, there was a report about girls playing Holi, and, by sheer luck, also a photograph of the great writer Mahadevi Verma. I titled this painting “Ladkiyan Hain, Khelne Do”, which, once again, I translated as “It’s spring: the girls want to play”. And because the torture Asifa endured was also due to the fact that she was a Muslim, I also included a painting I had made of a lynching.

As the months passed and I continued to work on the novel I was writing, I kept thinking about Asifa. One particular turning point in all this perverse drama struck me as a particular challenge. The savagery of the perpetrators was quite obvious, but what I could not understand was the fact that a protest march by a newly formed group had been organized in defense of the accused. Why? According to the newspaper article I read, the organizer of the march was a high-ranking political leader. If such a heinous crime still found defenders, then perhaps it was unnecessary for the narrator of my novel to believe in the presentation of the truth. Because it was clear that the truth did not necessarily change people’s minds. The facts would be distorted to confirm people’s prejudices and their deepest prejudices. We weren’t just dealing with bad news; our real problem was bad faith.

How are we so blinded by hate? I have a suspicion that some people think that our aversion to one community or another is ingrained in us, that it is so deep and pure that it is almost natural if not so mythical. But that would be wrong. There is good reason to argue that at least in terms of community differences in India, colonial rule by the British played a decisive role. The score is a long and bloody gash in our collective memory. Estimates of the number of people who have died range from 200,000 to two million. In what may be the largest migration in history, between 10 and 20 million people have been displaced.

But even Partition didn’t come out of nowhere, British historian Alex von Tunzlemann told me. She said: “Colonial rule was itself physically violent and helped create a society in which violence was normalized: this is why Gandhian non-violence was so radical. Pairing this violence with a “divide and conquer” policy – which was particularly visible after the census began in the 1870s – has had serious consequences. Consider the artwork that the late Zarina Hashmi contributed to the As If A Girl Matters museum: a wavering, thick, black line, arbitrarily drawn in a geography that is otherwise continuous. It is as if a powerful and invisible hand created a loophole and imposed an ideology of difference on an entire territory. Hashmi’s art is a powerful reminder that the horror of sheet music endures. The dividing line that runs through Asifa’s life is, as Hashmi might have said, now the atlas of our world.

On its website, “as if a girl mattered” expresses the desire to express our common humanity. for me, it starts with an ethic of hospitality.

While acknowledging the explanation provided by the story, there is another side of me that doesn’t just blame the British. I can only echo the questions asked long ago by filmmaker Khwaja Ahmad Abbas: “Have the English whispered in your ear that you can cut off the head of any Hindu you find, or that you have to stick a knife in the stomach of any Muslim? you find? Did the English also educate us on the art of committing atrocities on women of other religions directly in the market? Did they teach us how to tattoo Pakistan and Jai Hind on women’s breasts and secret organs?

Studying history can provide context, von Tunzelmann told me, but it does not provide excuses. What that means, I believe, is that we take responsibility. It is striking to me that the hate traders in our society, pursuing their dog whistle policy, are making their mark in the public arena by repeating what the colonizers have done successfully: put communities at each other’s throats. and strip us of any sense of oneness. . Their passion is so obscene that those who oppose are thrown in jail, while those who call for riots are rewarded. 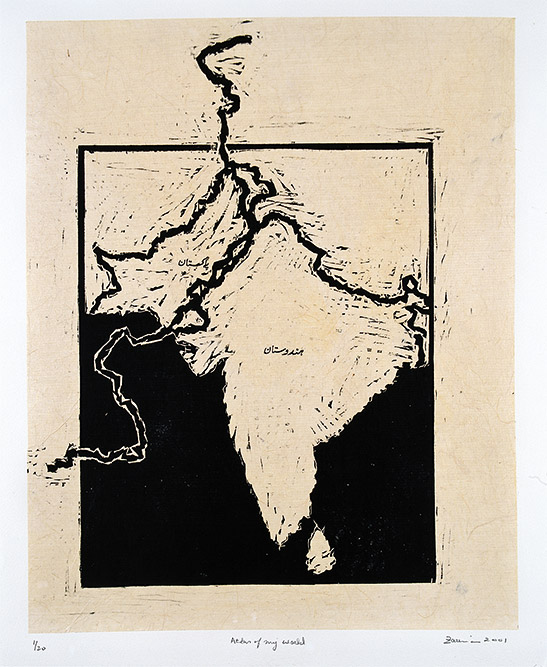 “Line of Separation / Atlas of My World” Copyright: Zarina Hashmi

On its website, the As If A Girl Matters museum expresses a desire to express our common humanity. For me, it starts with an ethic of hospitality, with the idea of ​​making the other, who is a foreigner, feel welcome at home. I often think of a poem by the Palestinian-American poet Naomi Shihab Nye, which begins: “The Arabs used to say / When a stranger appears at your door / feed him for three days / before asking who he is , / where does it come from / where it is going. / Like that, he will have the strength to respond. / Or you will be / such good friends / you don’t care. Or, if that’s too much, can we at least be more welcoming of our laws and allow them to come fully into our lives?

For two or more years after Asifa’s murder, I continued to work on my novel. The book ends with a meditation on the life left in a slain man. I imagined the death of Mohammed Akhlaq and also of George Floyd. We live in a world where the media often repeat like parrots the propaganda produced by the powerful. In such a world, the novel can function as a democratic platform: composed of many characters and presenting a plurality of points of view, the novel can inaugurate a public sphere often absent from real life. Or maybe I’m presenting too grandiose a vision of my aspirations as a writer. The point is, I wrote a novel to keep alive a precious little truth, a truth about the times we live in. daily task. Remember Asifa and others like her to keep the human in us alive as well.

Amitava Kumar is the most recent author of the novel A Time Outside This Time. Born and raised in Bihar, he now teaches English at Vassar College in New York.